What is the Difference between Alzheimer’s and Dementia

What is the Difference between Alzheimer’s and Dementia 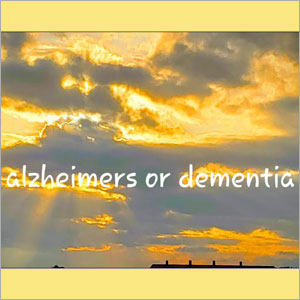 After spending much time conferring with the general public I have come to the conclusion that most people have a hard time distinguishing between Alzheimer’s and dementia.

Recently, I was thrilled to read an article by Dr. Robert Stern, Director of The Boston University Alzheimer’s Disease Center. Stern simply explained that, “Dementia is a symptom, and Alzheimer’s is the cause of the symptom. A good analogy to the term dementia is ‘fever.’ Fever refers to an elevated temperature, indicating that the person is sick, but it does not touch on any information on what is causing the sickness.”  This also falls true for the word “Flu.” You are basically being told you have flu like symptoms, but not what type of virus that is causing it. So, essentially what he’s saying is that dementia is not the disease; it is one of the symptoms of the disease..

There are many causes of dementia and yes, some are reversible. But unfortunately, 70-80 percent of all cases occur from Alzheimer’s which is not reversible. In fact, it is a fatal disease climbing the charts as one of the leading causes of death.

The word “dementia” has come to replace many old terms such as senility, having senior moments or experiencing a second childhood.

It is also important to know that dementia is not necessarily a normal part of aging. If it does present itself, the person showing signs should be checked out thoroughly. The significance of a correct diagnosis could make all the difference in putting the patient on the right track and possibly curing the problem.

Fighting for the cause against Alzheimer’s includes educating the public to be aware of all the disabilities involved with the disease. This also means educating the medical community. Over the past several years I have noticed many doctors becoming at ease with the inclination toward diagnosing the patient with Alzheimer’s disease a little too quickly when, in fact, it may actually be another type of dementia related disease, and possibly a form of dementia that could be reversible.

So remember this; when dealing with Alzheimer’s or dementia, beginning with a proper diagnosis is essential so that the patient can immediately be prescribed the correct treatment or therapy and the medical staff and family can plan ahead from this point and get started on the right foot.

Although symptoms of Alzheimer’s disease have usually been known to appear in people that are in their late sixties or older, there are now an estimated 1/2 million people under the age of sixty-five who have become afflicted with the disease. This is known as “Early-Onset Alzheimer’s Disease.” Studies show that there are cases of patients in their thirties, but this is extremely rare.

The genetic path of inheritance is much greater in Early-Onset Alzheimer’s. Those that have a parent or grandparent who developed the disease at a younger age have a higher risk for contracting it themselves.

When this disease invades so early in life, a number of problems quickly unfold. These newly stricken, may still be caring for a parent afflicted with the same illness and, meanwhile, may have their own children still living at home. Family members, neighbors and coworkers might ridicule and berate these persons, calling them straight-out lazy, when the fact of the matter is, Alzheimer’s has destroyed their motivation and concentration. Commonly, people living with dementia experience heavy bouts of depression and frustration. Often, even marital problems develop from being misunderstood and mis-diagnosed.

According to the experts, 80 percent of with early-onset will lose their employment and their corresponding income.

Alzheimer’s disease is devastating at any age, but it seems to be so much more unfair when it strikes at a younger age. Please be aware that the incident of Early-Onset Alzheimer’s and other dementias is growing at an alarming rate.

The familiar picture of an elderly man or woman, staring blankly out of a window from a wheelchair, is no longer the face of Alzheimer’s.